A man was shot near Campbelltown train station just before 2:45pm on Wednesday, 15th of May, after allegedly lunging at police officers with a 30-centimetre long knife.

Four uniformed officers approached the man after he was spotted at the train station turnstiles behaving suspiciously. A confrontation ensued, during which the man charged at the officers with the large knife, prompting the officers to use a taser against him, but to no avail. He was then chased from the station to Hurley Street, where he continued to threaten police with the knife.

The confrontation resulted in the man being shot once by police in the stomach. Three ambulance crews and a specialist medical team attended the scene to treat his single gunshot wound, before he was transported by ambulance to Liverpool Hospital in a serious but stable condition.

The entire incident was captured on the train station’s CCTV. While several bystanders who witnessed or were in close proximity to the incident were fairly shaken by the ordeal, all police officers and members of the public remained unscathed.

A Critical Incident Investigation team is now conducting an investigation into the circumstances surrounding the incident. The homicide squad overseen by the internal Professional Standards Command is working on ascertaining the facts of the shooting. An independent investigation will also be conducted by the Law Enforcement Conduct Commission.

Section 93C(1) of the Crimes Act 1900 provides that “A person who uses or threatens unlawful violence towards another and whose conduct is such as would cause a person of reasonable firmness present at the scene to fear for his or her personal safety is guilty of affray and liable to imprisonment for 10 years.”

Concerns were already raised in relation to the man’s behaviour, and witnesses to the incident reported feeling distressed. It can be deduced that bystanders at the scene would have feared for their personal safety, especially since the man had produced such a large weapon and was behaving dangerously with it. As such, the man’s behaviour could likely constitute an affray within the meaning of the section.

Armed with a weapon with intent to commit an indictable offence

It may be presumed that the wielding of a large knife would be accompanied by a high possibility of serious injury, especially as knives would cause the breakage of skin upon contact.

If proven in due course that the man had intent to inflict actual bodily harm with the knife, then he would be liable to a hefty prison sentence, as per section 114(1)(a) of the Crimes Act 1900, which provides that “Any person who is armed with any weapon, or instrument, with intent to commit an indictable offence, shall be liable to imprisonment for seven years.”

According to section 546C of the Crimes Act 1900, any person who resists a police officer in the execution of his or her duty will be liable to imprisonment for 12 months or to a fine of 10 penalty units. Here, the act of the man running away after brandishing a knife at police constitutes the act of resisting arrest by police. If a weapon is used or serious threats are made – both of which were evident in this case – that may elevate the severity of the offence to one that constitutes an indictable offence.

Section 60(1) of the Crimes Act 1900 provides that “A person who assaults, throws a isle at, stalks, harasses or intimidates a police officer while in the execution of the officer’s duty, although no actual bodily harm is occasioned to the officer, is liable to imprisonment for 5 years.” This provision could be most relevant to this case, as it can be perceived that the man did in fact intimidate the officers and assault police by way of verbal threats, although he inflicted no injury during the confrontation.

Hypothetically, if the man did inflict injury with his knife, this would attract the operation of section 60(2), which provides that a person who assaults a police officer while in the execution of the officer’s duty, and by the assault occasions actual bodily harm, is liable to imprisonment for 7 years.

Section 61 of the Crimes Act 1900 provides that any person who assaults another, without causing actual bodily harm, may face a maximum prison sentence of 2 years.

Threatening to hurt another person can be classified as common assault, even in circumstances where there has been no physical contact between the parties.

This offence could be relevant here due to the fact that, despite not causing any injury to anybody, the man did threaten police with his knife during the confrontation. 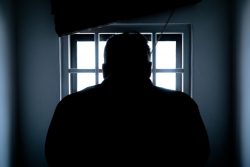 Hypothetically, if the man were to injure anybody during the confrontation, to the extent that an injury was sustained but not substantial enough to constitute grievous bodily harm, then he could have been charged with assault occasioning actual bodily harm (ABH).

However, it may be presumed that the wielding of a substantially sized knife would be accompanied by a high possibility of serious injury, especially as knives would cause the breakage of skin, and therefore are capable of causing grievous bodily harm (wounding that would have broken or cut both the inner and outer layer of skin).

The difference between reckless and intentional GBH is that with the latter, the person would have had intent to wound. This is a very serious offence and the offender could face a maximum penalty of 25 years imprisonment, whereas for reckless GBH, a person could face up to 10 years in prison (or 14 in the company of other people).

The prosecution will have to establish the offender’s state of mind by considering a variety of factors, including whether or not a weapon was used, the circumstances surrounding the assault, and any previous criminal history.

Hypothetically, if the man in this case had not been incapacitated and his confrontation with police did result in him inflicting injury on others with the knife, this section could very likely be relevant.